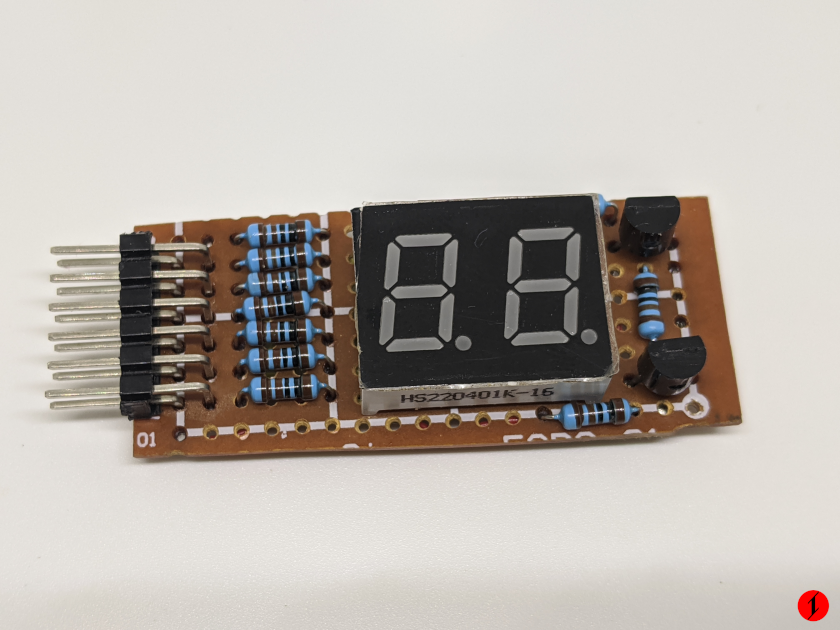 So what’s a Pmod? Basically these are modules that you will just plug that follows the Pmod interface specifications. You can browse Pmods by Digilent here. You could plug these into microcontroller boards or FPGA boards that supports the standard.

What I followed is the Pmod Interface Type 1A which utilizes all the GPIO on one Pmod port. The 2 digit 7 segment display Pmod of Digilent uses 2x Pmod Interface Type 1 which is space-inefficient. It also costs $6.99 compared to a more or less a $1 on mine. But I did get their VGA Pmod,

Here is the pinout of what I did, also this will serve as some sort of documentation for me too(lol).

The ABCDEFG are for which segment and the S is for digit select. The areas marked with black/red are for GND/VCC respectively. Haha, this is where having a custom PCB is convenient, just add a silkscreen.

The schematic is somewhat the same as Digilent’s, here is the link.

The next step after I finish making the circuit is to test if it works. So that’s what I did. I tested it with the Reverduino Core first(I will talk about this next time) if no smoke comes out.

Exhilarating (plus one if you get the reference)! It does work.

Here it is fitted with my Arty-S7. The code for their Pmod will also work here, the output pins will just be adjusted accordingly.

Now that I have a 2 digit 7 segment display Pmod, I guess it is time to design another. And hopefully have it in a custom PCB(or not).