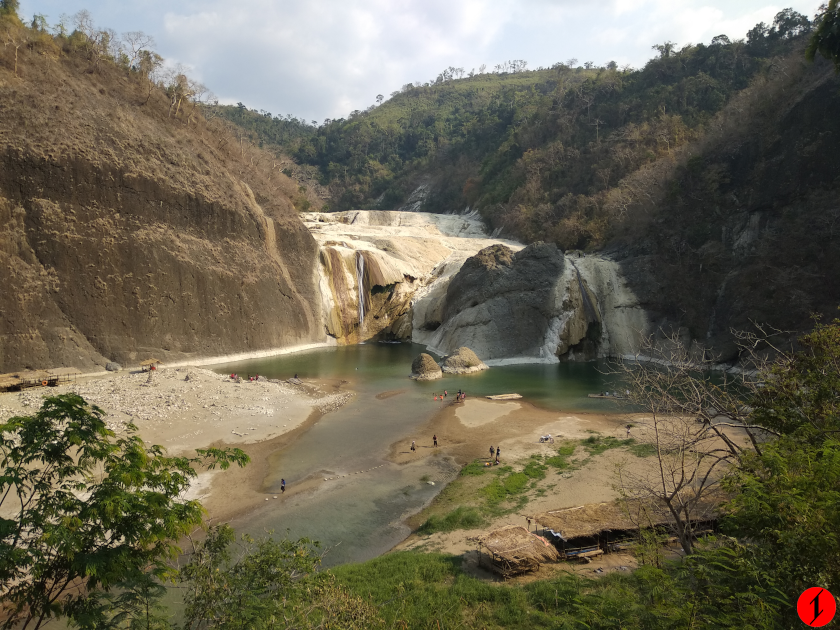 Some of my friends and I decided to visit a friend of ours in Ilocos Sur. Our friend decided to fetch us in a location where we will get off the bus. Just when we arrived there in the afternoon, our friend was already waiting there together with his father. They brought a car with them.

We went to Mang Inasal for a late lunch in Narvacan. That’s when our friend asked us if we would want to go to a church or to a waterfall. And we settled for the waterfall. His father drove us to the location of the waterfall. It is called the Pinsal Falls.

When we arrived there, we got to see this view:

We made the decision to go to the top of the waterfall first. I think the way to the top is dangerous. You could slip and that could be the end of all.

We went anyway. And these are some shots that I took with my phone on the top of the waterfall:

It is said that the place has more water during November. Anyway, after we were done with appreciating the composition of the top of the waterfall, we went for the ground view of the waterfall.

Here is a shot on the base of it:

No, we did not swim. I think just one of us was ready for swimming but most of us were not. We didn’t bring some apparel.

We went to our friend’s house after this where we really catch up with each other.

But before we could go to the car to go to our friend’s house. We had to walk the path to the parking lot where our friend’s father is waiting for us. Here are some images of it:

When we arrived at our friend’s house. We met his mother, grandmother, cousin, nephews, and nieces . We were welcomed with some snacks. We got carried away with our conversation. And notice that it was getting late. It was time to leave. His father drove us to the bus station located in Candon city. His relatives went with us. But we did not go straight away, we went to Arko first and check the place out. Here is the place:

And it was getting really late, don’t forget the travel time! They accompanied us to the bus station in Candon city. They even had let us have a stop in Candon city to buy some pasalubong. I bought some Kalamay. And yes, after this. We really went straight for the bus station this time. That’s when we said our thank you to our friend and his family.